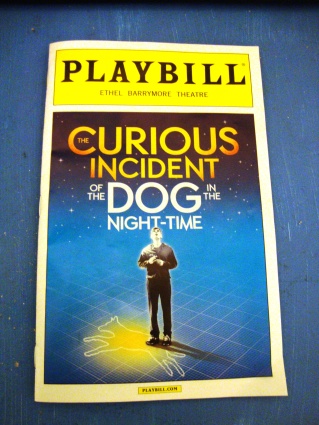 Seeing live theater is always a sensory experience, but “The Curious Incident of the Dog in the Night-time” is something special. It’s based on a book – one I hope to finally read soon – about a boy who tries to solve the mystery of who killed his neighbor’s dog with a pitchfork. It’s about more than that – the boy, Christopher, isn’t explicitly stated to be on the autism spectrum, but it’s implied – but the story’s other plot lines all tie back to the dead dog. I knew or half remembered reading about some of the story’s twists as I watched the show, but there was a lot I didn’t know.

I saw the show on a Wednesday night, which turned out to be one of the two nights that an alternate actor plays Christopher. He was great, and all accounts point to the main actor also being great, so no matter what you’re sure to see a wonderful performance. The other  characters, including Christopher’s therapist, who narrates much of the show by reading from a book Christopher is writing about the events, are also compelling. A number of actors play multiple bit parts, on stage to represent neighbors, or people on the subway, or passengers on a train.

The set is fascinating and flexible, an open space marked by grids and digitally enhanced. Projections on the back wall shadow what Christopher draws in chalk on the floor, or stars, or maps, or words. Walls and floor open to become cubby holes, stairs appear like magic along the back of the stage, almost blending in, and the floor moves away to reveal a subway track that Christopher waits beside. Lights and sound set the scene but also expose us as the audience to the sensory overload that Christopher lives with every day.

That’s why I was fascinated to read about a special performance that happened back in December – one especially tailored for audiences on the autism spectrum. Lights and sounds were adjusted to make the show more accessible, and other accommodations were made to create a comfortable environment for the audience. It was made possible through the Theatre Development Fund’s Autism Theatre Initiative, which just had a special performance of “Matilda” last week and has one of “Aladdin” coming up later this spring.

If you’re looking for an interesting and innovative show, definitely check out “The Curious Incident of the Dog in the Night-time”. And if you’re still not sure, read this article about a special, important animal in the play –maybe  it will give you an extra reason to go!

Has anyone else seen this show? What did you think?